In this article, David Taylor, our Tech & Telco Manager talks technology within the Recruitment sector...

I recently attended the Recruitment Expo and, shortly after, a LinkedIn Recruiter 'Champions' event at the LinkedIn HQ in London. Whilst I had expected a certain level of the conversation to be around the advancement of AI and technology in the recruitment sector, what became starkly apparent at both was the sheer volume of new technology saturating the sector. The growth of 'Rec Tech' is incredibly exciting and the speed at which these tools are improving is breakneck.

Gone are the days of limited newspaper distribution and a file of known Candidates. However as those methods become obsolete, is the way we work now also destined for irrelevance? Recruitment has seen massive changes over the past few decades, with the introduction of job boards, professional networking sites and social media advertisements, meaning that technology within the industry is now an irreplaceable member of the team.

The IDC recently predicted that big data and analytics will have grown from a $130.1 billion industry to over $203 billion by 2020. However their predictions come with a warning that more data will cause more confusion.

This data influx could lead to the addition of a new kind of Recruiter, with firms hiring Data Scientists and Analysts, in order to make sense of the overload. Irina Shamaeva, Partner at Brain Gain Recruiting, says that tech-savvy "Recruiters are already ahead of the game, stating that Recruiters who understand online sourcing are ahead of the competition."

So far, technology in the sector has only helped, with syndicated display advertising technologies, using cookie-based targeting, to look at behaviours that demonstrate an interest in a particular career. This SDA has been found to increase views on linked job postings by 40% for an ad that runs for 30 days, meaning we are fishing from a much greater and more precise pool of candidates.

More recently, AI has seen an influx within the industry, a move that hasn't always yielded great results. Whilst the technology has been found to reduce screening costs by 75%, the jury is still out on whether AI is able to identify cultural fit and talent with sticking power.

A good Candidate doesn't necessarily tick all of the boxes within a job requirement and with more employers placing importance on transferable skills and corporate fit, over qualification matching, AI is going to have a tougher time than originally thought. Like an online dating profile wonít find you a partner in the same way a friend will, Artificial intelligence often struggles in a way a Recruiter won't.

What AI does do well is to remove bias from the screening process. In a world where diversity is becoming more of a spotlight issue, AI is able to both identify gender-biased phrasing within adverts, which can unintentionally encourage a hiring bias and avoid unintentional bias by Hiring Managers.

While we're still getting to grips with the technology we have, the future isn't slowing down. In fact predictions include the use of voice recognition to analyse candidate's vocabulary, tone and syntax, which will be coupled with facial recognition to decode expressions, and be implemented in just a few short years. And whilst only 3% of Recruiters and Hiring Managers use VR within their process currently, 30% told Universum that they think it will transform their workplace within 10 years.

I agree that the old school 'hustle harder' philosophy within recruitment is dying and that as an agency we need to continue to innovate and embrace the changing landscape of recruitment. It is important that we are constantly questioning; What market intel do our clients need to help them recruit? What are their biggest recruitment challenges and how can we support them? What more can we do to offer greater value in the recruitment process? How do we utilize technology to find the best candidates for our clients?

That being said, can you ever fully replace some of the traditional methods such as simple networking? Will there ever be a technological replacement for meeting someone, building a relationship, understanding their motivations and matching that to your client based on those same core values? Surely that is still the greatest value a recruitment company can add even in this ever changing environment. 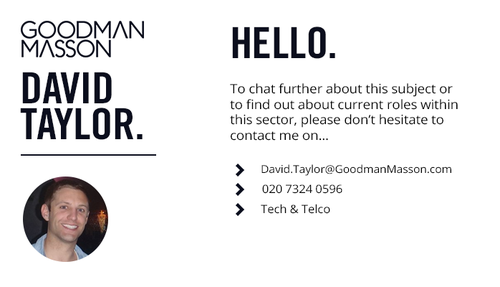